Kayaking in a picturesque creek in the Village of Brookfield

The waiting room in the Frank Lloyd Wright Home and Studio

Overlooking the village of Riverside with Chicago's skyline in the distance

Exploring the woodlands at the Hal Tyrell Trailside Museum

Pleasant Home, an 1897 Prairie Style-house now open as a museum

A sampling of scrumptious offerings at The Heritage in Forest Park

Exterior view of the Frank Lloyd Wright Home and Studio

Just a short ride on the “L” train from Chicago is a gem of a destination for savvy travelers and history buffs. The unassuming suburban charm of the Village of Oak Park, Illinois, belies its historical significance – it’s home to the world’s largest number of Frank Lloyd Wright-designed structures and also is the birthplace of American author Ernest Hemingway. In addition to a wealth of historical interest, Oak Park offers international cuisine, a full events calendar, a walkable downtown and family-oriented attractions.

An Architectural Treasure in Oak Park

Frank Lloyd Wright spent the first 20 years of his career, from 1889 to 1909, in Oak Park. In the Frank Lloyd Wright District, dozens of private homes and several public structures display his distinctive Prairie School architecture. A guided walking tour highlights significant sites, including the architect’s home and studio and the Unity Temple, a National Historic Landmark that recently underwent a restoration that cost $25 million U.S. dollars. The Wright Plus Housewalk in May offers a rare chance to see interiors of privately owned Wright-designed homes. Architecture fans will also enjoy exploring the Gunderson District, the Ridgeland-Oak Park Historic District, George W. Maher’s Pleasant Home and the neighboring town of Riverside, designed by renowned landscape architect Frederick Law Olmsted and home to more than 70 notable designs from 20th-century architects.

A Hemingway History in Oak Park

Pulitzer- and Nobel Prize-winning author Ernest Hemingway is usually associated with Cuba, Spain or Key West, but he was born in Oak Park in 1899. His birthplace, a circa 1890 Queen Anne-style home, was the first in town to have electricity. After serving as a rental property for 80 years, the house was meticulously restored to its original beauty by the Ernest Hemingway Foundation. A tour of his birthplace is a must when visiting Oak Park.

Traveling with younger ones in tow? Not a problem. Take the crew to the Brookfield Zoo to see everything from penguins to pythons and polar bears. There are also evening concerts in the summer. Escape to the tropics any time of year – for free – at the Oak Park Conservatory indoor botanical gardens. See native animals and hike in the woods at the Hal Tyrrell Trailside Museum of Natural History, which also offers free admission. Enjoy hands-on exhibits and play areas at Wonder Works Children’s Museum. The Galloping Ghost Arcade lays claim to the largest video arcade in the USA. Relive your childhood playing 600 games spanning from the 1970s through the 2000s.

Oak Park is home to more Frank Lloyd Wright-designed structures than anywhere else in the world.

The church scene in the 1990 “Home Alone” movie was filmed at Grace Episcopal Church in Oak Park.

Fun Stops and Photos Ops: The First Stretch of Route 66 in Illinois

Fashion Outlets of Chicago in Illinois: Designer Brands Just Outside the City

Where to Shop on your Visit to Chicago, Illinois

A Day in the Life of a Chicago, Illinois Native

Soul, Pride and a Whole Lot of Blues in Chicago, Illinois

Ask a Local About Chicago, Illinois

Chicago, Illinois: Holiday Fun and Fashion for the Whole Family

Chicago, Illinois: Shopping and Entertainment in the City

Chicago Attractions: 4 Tours to Take in the Iconic Illinois City

3 Days in Chicago, Illinois: Must-See Places on Your First Visit 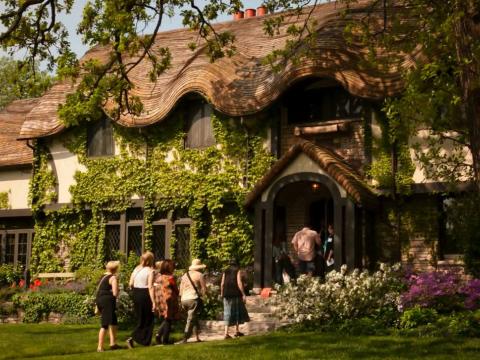 Home for the Holidays

Combining Culture and Fun on Route 66 in DuPage County

Spotlight: The Underground Railroad on the Shawnee National Forest

Quad Cities: Fun and Friendly Destination with So Much to Explore