View of the iconic skyline from the One World Observatory

The Statue of Liberty, a world-renowned symbol of the city, as seen from the Staten Island Ferry

Relaxing under a canopy of trees at Brooklyn Botanic Garden

The pretty entrance to the Bronx Zoo

The stunning skyline from the river

A lifetime’s worth of experiences in one city

With a globally recognizable skyline and 8.4 million people who call it home, New York City is bursting with diversity and excitement – from the iconic attractions you've seen on TV and in the movies to hidden gems waiting to be uncovered. Each of the five boroughs – The Bronx, Brooklyn, Manhattan, Queens and Staten Island – has a distinctive flavor, while individual neighborhoods maintain identities all their own. Walkable streets and access to the subway, buses and cabs make it easy to get from neighborhood to neighborhood. Whether it's your first visit or your hundredth, there's always something new to do.

You’ve seen them a million times in the movies, but there’s nothing like taking in these quintessential New York City landmarks in person. First stop, a tour of the Statue of Liberty and Ellis Island, capped with a free ride on the Staten Island Ferry for stellar views of both.

Immerse yourself in the bustle and bright lights of Times Square followed by the incomparable spectacle of a Broadway show – both experiences that you can’t find anywhere else but NYC. Explore Rockefeller Center, and take a trip to the top of the Empire State Building. Experience Grand Central Terminal, a unique architectural gem and the city’s major transportation hub.

Central Park – the city’s urban park centerpiece – is a 341-hectare oasis of meadows, arches and sculptures, as well as running paths and playgrounds. Other green spaces dot the city, including Brooklyn’s Prospect Park, the Bronx’s Pelham Bay Park, Staten Island's Greenbelt and Flushing Meadows Corona Park, Queens’ largest, with a huge recreation center, plenty of room for sports and a botanical garden.

As panoramic scenes go, NYC can’t be beat. Walk across the Brooklyn Bridge for views of New York Harbor and the city’s skylines or scale 30 Rockefeller Plaza’s Art Deco skyscraper to Top of The Rock, an observatory offering 360-degree views of the city. Newly-opened One World Observatory on the 100th floor of One World Trade Center shows off Manhattan, Brooklyn and New Jersey.

Culture buffs love the world-renowned Metropolitan Museum of Art, the Museum of Modern Art’s modern masterpieces and the Whitney Museum of American Art’s many contemporary works. Stop at the enormous American Museum of Natural History to marvel at the rich collections on display.

Don’t miss the numerous institutions outside Manhattan. The Brooklyn Museum, Queens Museum of Art, the Bronx Museum of the Arts and the Staten Island Museum are all inspiring cultural destinations.

It's a cliché to say that New York is the “city that never sleeps,” but it's true. No matter what you’re looking for – karaoke, live music, dancing – you can find it at all hours. See the New York Yankees’ historic home ballpark. Head to Madison Square Garden to catch an ice hockey match, basketball game or concert.

There's plenty for families too: Visit Brooklyn’s nostalgic beach neighborhood Coney Island to stroll the boardwalk and enjoy amusement park rides. At Bronx Zoo, the USA’s largest metropolitan zoo, you’ll see everything from American bison to baboons. If shopping is more your style, the five boroughs are brimming with department stores, boutiques, showrooms and vintage havens.

The first pizzeria in New York City opened in 1895.

Global appeal: The city is home to 1,200 cultural institutions, including museums, performing arts venues and much more.

So Much Pride, So Little Time

New York, New York: Sights and Shopping at Macy’s Around the City

9 Travel Hacks To Get You Through New York

New York City: Cultural Attractions to Visit in Every Borough

4 Places to Have a Quintessential Northeast Christmas in the USA

The Excitement of Super Bowl Week in New York City

7 Great Thanksgiving Parades in the USA 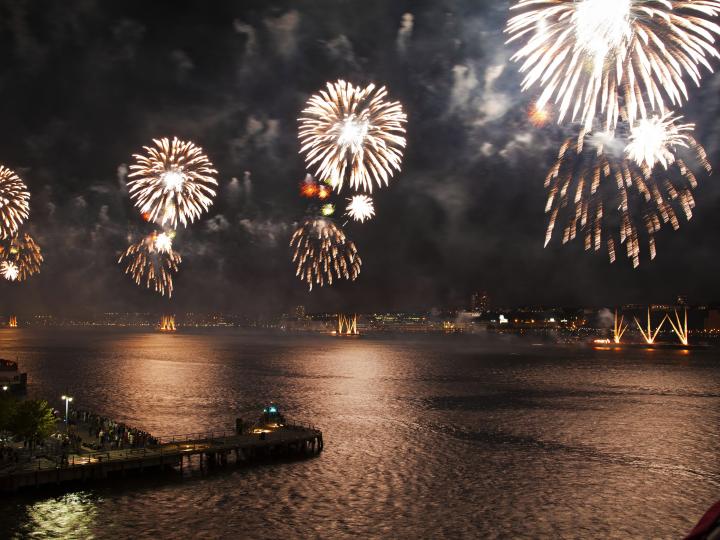