Sunset sailing on the Hudson River

Mumford & Sons rocks the crowd at Pier A Park in Hoboken

Kayaking past the Statue of Liberty in the Hudson River

An exciting soccer match at Red Bull Arena in Harrison

The cultural hot spot within view of New York City

Once a major gateway to the USA, Hudson County welcomed millions of immigrants fresh from their steamships into the Bergen Neck peninsula region, a landscape of hills, inlets and neighborhoods mostly sandwiched between the Hudson and Hackensack Rivers. Today, with Jersey City as its county seat, the area is an eclectic urban destination with a revitalized feel, an international population (second in size only to New York City) and lots of green space. Less than one kilometer away from New York City, here you’ll find ethnically diverse cuisine, exciting cultural events, emerging art districts and a cosmopolitan sensibility to rival that of its popular neighbor’s, as well as sports attractions and plenty of outdoor recreation.

Liberty State Park is a breath of fresh air on New York Bay amid the city hustle and bustle. Just across from Liberty Island and Ellis Island, the park’s 405 hectares include a promenade with a Statue of Liberty overlook. See the historic Central Railroad of New Jersey Terminal at the park’s north end, bike or hike Freedom Way’s trails, or take a kayak eco-tour on the Hudson River. At the Empty Sky 911 Memorial, a corridor of stainless steel focuses in on the space where the Twin Towers used to be and honors those New Jerseyans lost in the attacks. Don’t miss the Liberty Science Center’s 12 galleries and hundreds of exhibits or its IMAX dome theater, considered the USA’s largest. From here, take a Statue of Liberty Cruise by ferry to get even closer to the NYC skyline.

Several museums reflect the area’s diverse traditions and cultural influences. Explore the unconventional collection at The Museum of Russian Art, which features the work of rotating artists as well as permanent holdings. Look for seasonal exhibits that expand on the museum’s Avant-Garde and Nonconformist art focus. Take a trip to the Afro-American Historical and Cultural Society Museum, housed on the second floor of a library and filled with memorabilia, artifacts, documents and photographs that explore the area’s African American heritage. Check out downtown Jersey City’s Powerhouse and Riverview art districts to really get a sense of the community’s vision before heading to Mana Contemporary to see cutting-edge art, dance performances and even film screenings. Catch a concert or play at The Landmark Loew’s Jersey Theatre before you go.

Get Out and Go

When you’re not kayaking or sailing on the Hudson River, or jet skiing past the Statue of Liberty on a guided Sea the City tour, carve some time out for Pole Position Raceway. This indoor go kart facility is the place to compete around the track in small or large groups, offering karts for kids of every size – and age. For bigger thrills, get tickets for a soccer match, rugby game or a concert at Red Bull Arena, home of the New York Red Bulls Major League Soccer team. If you want to get out and play yourself, Pershing Field Park offers an ice rink, pool, playground, fields and courts for any sport you can think of.

In Hoboken, visitors can tour and enjoy treats at the original Carlo’s Bakery of reality television show “Cake Boss” fame.

The Statue of Liberty is actually located in Jersey City, even though New York still has legal jurisdiction.

The Liberty Science Center is home to the nation’s largest IMAX dome theatre.

Hudson County, New Jersey: The Gateway to the USA

So Much Pride, So Little Time

Stonewall: The Birthplace of the USA’s Modern LGBT Rights Movement

4 Places to Have a Quintessential Northeast Christmas in the USA

7 Great Thanksgiving Parades in the USA

The Excitement of Super Bowl Week in New York City 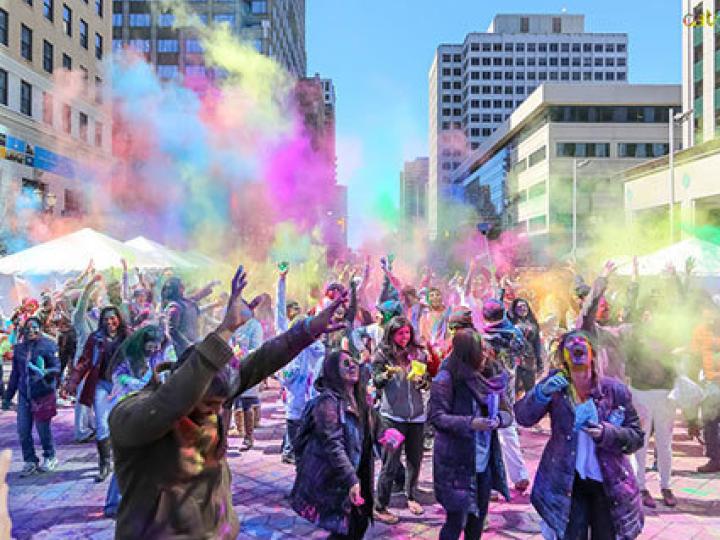 All About Downtown Street Fair

Hudson County, New Jersey: The Gateway to the USA