Meeting some of the friendly residents of Mistletoe Farm

The Factory at Franklin, a dining, shopping and entertainment destination

Stroll the quaint Main Street in Franklin. Listen to authentic American music and sip Tennessee whiskey while enjoying the hospitality and warmth of this Southern gem. Christmas is an especially magical time to visit; the Victorian-themed decorations and events feel like they’re straight out of a Dickens novel. But the city, the site of a major Civil War battle, welcomes visitors year-round with much to explore for fans of history, shopping, music and outdoor fun.

Learn about the Civil War’s important and bloody Battle of Franklin at three historic sites in the city. Tour the battle’s memorial at Carnton, an estate built in 1826 that’s now a museum and National Historic Landmark. The Carter House is home to a unique bit of history: One of the most bullet-riddled structures of the Civil War remains on its property. The Carter family survived the battle in the home’s basement. Cross the street to tour the majestic Lotz House, which still bears the burn mark in the hardwood floor from a cannonball tearing through the roof. During the battle, the Lotz family sought refuge in the Carters’ basement.

Franklin’s place in the history of country and Americana music is undisputed. It’s even a stop on the Americana Music Triangle driving tour. Music reigns supreme along 16 square blocks of Main Street, with professional theaters, houses-turned-venues, and even stages tucked into boutiques and restaurants. Catch a show at the historic Franklin Theatre, opened in 1937, fully restored to its original glory with the addition of modern sound and lights, on Main Street. Country stars such as Jimmie Allen and Walker Hayes were discovered on the stage of Puckett’s Grocery & Restaurant downtown, and music icons like Justin Bieber and Brad Paisley have written songs about Franklin and filmed videos on Main Street.

Fancy some fantastic sips? With two whiskey distilleries in the area, Franklin is the center point of the state-wide Tennessee Whiskey Trail. Book a tour at Leiper’s Fork Distillery, which opened in 2016, to learn about the colorful history of small-batch whiskey production in Williamson County. The distillery makes its spirits with local ingredients and limestone-filtered water. Drive about 15 minutes south to the picturesque town of Thompson’s Station to check out Company Distilling. The outfit makes a wheated bourbon finished with maple wood. Wine drinkers should head to Arrington Vineyards, owned in part by country music star Kix Brooks. The winery features 20 red, white and dessert wines; it’s a stunning spot for a picnic.

Whether you’re looking for souvenirs or gifts to bring home, you’ll find them in the many welcoming shops of Franklin. Stroll the variety of stores on Main Street or explore The Factory at Franklin. The former stove factory is now a prime spot for shopping, dining and entertainment. The Factory is home to an eclectic mix of locally owned shops selling artisan furniture, handmade jewelry, art and much more. It’s also the perfect spot for a snack or meal.

Just over a decade ago, there were three whiskey distilleries in Tennessee; now there are more than 75, including some in Franklin.

The most bullet-riddled building still standing from the American Civil War can be found at the Carter House in Franklin. 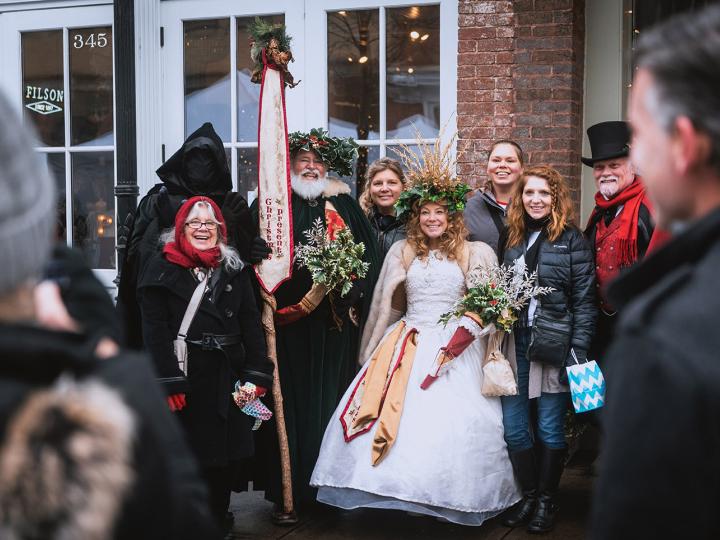 Dickens of a Christmas

Bluegrass Along the Harpeth

Franklin on the Fourth

5 Hikes Where You Have to Hold on Tight