Touching the ivories at FAME Recording Studios in Muscle Shoals

Touring the site of the former Forks of Cypress plantation

Dinner at the 360 Grille with spectacular views of the city

If you’ve ever heard of the Rolling Stones, Paul Simon or Aretha Franklin, you’ve heard of Florence and Muscle Shoals, Alabama – or at least, you know what they sound like. In this unassuming corner of northwest Alabama lies a small town that has turned out some of the most recognizable songs and voices in music. It’s the birthplace of the “Father of the Blues,” W.C. Handy, and the origin of the Muscle Shoals Sound, a mix of Gospel, Blues and Soul with Rock and Country tones. Music is the biggest hit in Florence, but visitors can also tune into unique historical sites, eclectic shopping and mouthwatering comfort food.


Music Roots, from Classic to Contemporary

Start at the W.C. Handy Birthplace, Museum & Library. It’s in this tiny log cabin that the Father of the Blues was born and composed defining songs like “St. Louis Blues,” “Beale Street Blues” and “Memphis Blues.” If you visit in July, plan to attend the 10-day W.C. Handy Music Festival. Tour the legendary FAME Recording Studios, where musicians like Etta James, Aretha Franklin and the Drive-By Truckers have recorded. In 1969, musicians from FAME Studios broke away to form Muscle Shoals Sound Studio, subsequently turning out chart-toppers by Willie Nelson, Paul Simon, Rod Stewart and hundreds more. The full scope of Alabama’s musical influence is on display at the Alabama Music Hall of Fame, packed with awards and memorabilia from more than 1,200 artists, writers and managers.

Climb the 2,000-year-old Florence Indian Mound and visit the Indian Mound Museum to see relics dating as far back as the Ice Age. Drive along the Natchez Trace Parkway, which follows a 715-kilometer path created and used heavily by traders and Native American tribes. One must-see stop is Tom’s Wall, recognized as the largest un-mortared rock wall in the USA. Tom Hendrix built the tiered wall in honor of his great-great grandmother, a member of the Yuchi tribe who was forced to leave her home and walk the Trail of Tears to Oklahoma, but perilously found her way back to Alabama.

Continue your history tour at Pope’s Tavern and Museum – a former stagecoach shop, tavern and inn turned command post during the American Civil War – where you can view relics and hear stories from the past. Find Helen Keller’s birthplace in nearby Tuscumbia, with tours available Monday through Saturday. Attend the Helen Keller Festival in June or see “The Miracle Worker,” a play dedicated to her life that runs weekends in June and July. Frank Lloyd Wright’s Rosenbaum House is a must-see for any architecture fan; this single-family home has been called the perfect example of a Usonian work, Wright’s vision for modern, affordable architecture. Schedule a walking tour of the University of North Alabama campus, home to several Civil War-era buildings and the school’s two live lion mascots.

Where to Eat, Drink and Stay

Visit downtown Florence for locally owned shops, restaurants and live music. Find men’s fine fashions at Billy Reid or Jar & Company, funky women’s items at aptly named The Eclectic, vintage vinyl records at Underground Art & Sound and made-in-the-USA jewelry and gifts at Perennial Supply Co. Hungry yet? Order a beer at Singin’ River Brewery followed by the lunch special from Odette or a slaw dog from Bunyan’s Bar-B-Q. The 360 Grille, a rotating restaurant overlooking the Tennessee River, is an exceptional option for fine dining with a view. Get off the beaten path for dinner and live music at the Rattlesnake Saloon, a festive venue tucked into a cave-like setting under a massive rock.

The cover photo for Cher’s 3614 Jackson Highway album was taken in front of Muscle Shoals Sound Studio, where she recorded the songs.

The Rosenbaum House is the only Frank Lloyd Wright-designed structure in Alabama.

A Weekend in Tupelo

Dinner, Drinks and Music in Birmingham, Alabama: A Day-to-Night Guide

Birmingham, Alabama: 3 Reasons Everyone is Noticing the Culinary Scene

Birmingham, Alabama: A City Steeped in History and Filled with Culture

Graceland: The Legacy of Elvis Lives on in Memphis 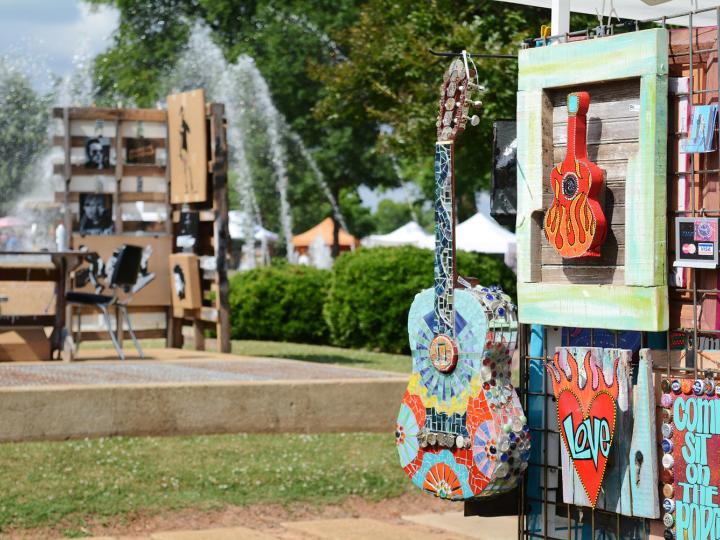 Smoke on the Water Festival and Barbecue Contest

7 Spots for Family Fun Around the USA