Beautiful day to explore downtown, home to more than 200 buildings on the National Register of Historic Places

Sampling a selection of bourbon at one of the local distilleries

Putting the finishing touches on a bottle of Willett whiskey

Performance of The Stephen Foster Story at the J. Dan Talbott Amphitheatre

A charming town where bourbon is just the beginning

As the official start of the Kentucky Bourbon Trail, the immediate draw to Bardstown for visitors is an immersion in all things bourbon – history, culture, attractions and, of course, tastings of the Kentucky-made whiskey. A pleasing bonus is finding a huge slice of Americana in a beautiful small town.

Enjoy bourbon year-round in Bardstown and surrounding areas, but spring and fall are the most event-filled times of the year. The crown jewel is the six-day Kentucky Bourbon Festival in September, filled with bourbon, food, entertainment and that famed Kentucky hospitality. A hidden bourbon gem is the Oscar Getz Museum of Whiskey History, named Whisky Magazine’s Visitor Attraction of the Year in 2014 and featuring items from bourbon’s vast history up to the present day.

The Barton 1792 Distillery & Visitor Center – established in 1879, but named after the year Kentucky became a state – is the oldest operating distillery in Bardstown. Free behind-the-scenes tours include the fermentation and distilling processes and a look inside historic warehouses. Toast the tradition with a free sample after the tour.

At the family-owned Willett Distillery, founded in 1936 (three years after Prohibition ended), step inside the modern visitor center at the historic site. After a walking tour of the grounds and distillery, taste whiskeys, then take the signature glass home as a souvenir. Plan in advance to tour the Maker’s Mark Distillery; you’ll want to reserve a table for lunch and cocktails at on-site restaurant, Star Hill Provisions, which specializes in farm-to-table cuisine that complements your choice of bourbon.

Learn about bourbon history in addition to the origins of Heaven Hill Distilleries at its Bourbon Heritage Center. After a tour, sample whiskeys while honing in on the importance of color, aroma, taste and finish. Guided tours at the Jim Beam American Stillhouse take visitors through the process of making bourbon, starting with limestone well water through bottling; purchase a token at the front desk to exchange for an inspired cocktail. Learn all about a 1910 Spanish mission-style facility and its mellow bourbon during “A Taste for History” presentations at Four Roses Distillery, which has expanded to meet increased demand.

Nearly 50 historic sites are on the itinerary for a self-guided walking tour of historic Bardstown; get a copy at the city’s Welcome Center and explore what the locals call Museum Row. Must-visit attractions include The Stephen Foster Story, an outdoor musical dedicated to the man known as the USA’s first composer; My Old Kentucky Home State Park, where the centerpiece is the Federal Hill mansion that inspired Foster to write the song “My Old Kentucky Home;” the Civil War Museum near a collection of 10 Colonial buildings at Old Bardstown Village; and My Old Kentucky Dinner Train, where passengers ride and dine in 1940s railcars.

Bardstown’s inviting downtown also offers opportunities for shopping, dining, ghost tours and sightseeing outings via a horse-drawn carriage ride. Go golfing, or paddle along a calm river or whitewater rapids. Step inside pubs, taverns and tap houses for a bourbon or a beer. When it’s time to turn in for the night, stay in a hotel with a familiar name, opt for one of the quaint bed-and-breakfast inns throughout the two or find a spot in one of three local campgrounds.

Bardstown was named the “Most Beautiful Small Town in America” in 2012 for the Rand McNally/USA Today Best of the Road competition, and Travel + Leisure said the city has “America’s Most Beautiful Town Square” in 2013.

Because bourbon-making began here, and Bardstown is the home of nine distilleries (and counting), the city markets itself as the “Bourbon Capital of the World.”

More than 200 downtown Bardstown buildings are on the National Register of Historic Places.

Louisville, Kentucky: A City Full of Parks for Every Explorer

An Insider’s Guide to the Kentucky Derby

Off to the Horse Races in the USA!

A Weekend in Louisville

Boats and Bourbon: The Perfect Pair in Kentucky

The Bourbon Trail in Kentucky 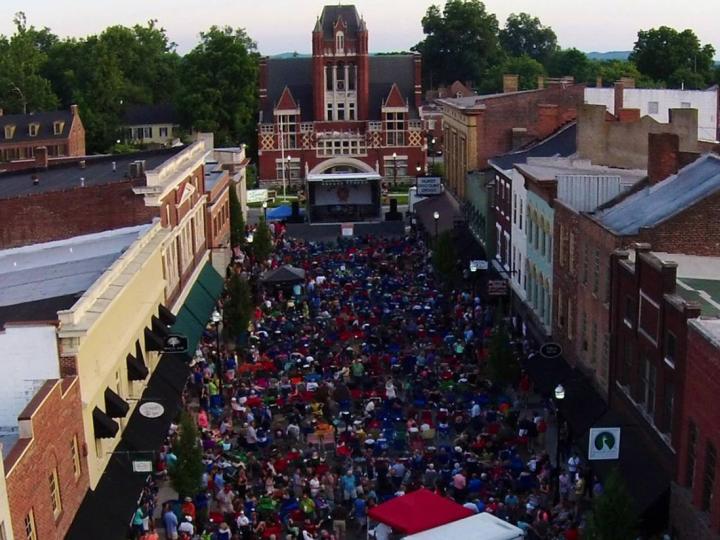